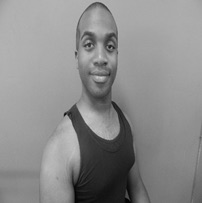 Chad Austin, a native of South Florida, and was a student at Miami-Dade New World School of the Arts. His elaborate dance history includes powerful performances as well as auspicious choreographies.  Chad Austin began his dance career at Vision Dance Company with Dianne Taylor but really began to infuse his passion of dance with dedication at The Elegant School of Modern Dance (ESMD) in 2006 under the tutelage of Shawna Bowden.  Having attended Master Classes with Troy Powell and Hope Boykin from Alvin Ailey, Chad Austin had already begun to plant the seeds of his goal to bring dance and exposure to the arts to younger dancers at ESMD.

Chad has performed in many productions, “The Lion King”, “The Wiz” “Journey to Broadway”, “Tribute to Alvin Ailey” “Kings of Our Home Land” and “Revelations”. Chad Austin was the Assistant Artistic Director for 3 years at ESMD/DEDC and managed the company while the Artistic Director was on maternity leave.  After almost 10 seasons with the company, Chad Austin left to pursue his dream as a freelance choreographer.

Chad Austin was afforded the opportunity to continue in the field of teaching and accepted the position to teach and choreograph with Melanie Gibbs at Boca Dance Studio in Boca Raton, Florida. He taught and choreographed students varying from age 8 to 17 at Boca Dance for 4 seasons. While teaching, Chad Austin often entered his signature pieces in the South Florida Choreographer’s Ball. His signature pieces include “S11” “Break. Fall. Recur” and “Woman”